Today I explored the use of projection mapping, using the MadMapper software, a projector, and various surfaces around the room, such as whiteboards, doors, buttons and cardboard boxes. Before using the software and equipment, I researched the work completed by others in the spatial montage and projection mapping field. Some particular examples really stood out, that later inspired some of our experiments, and will undoubtedly spark further research: 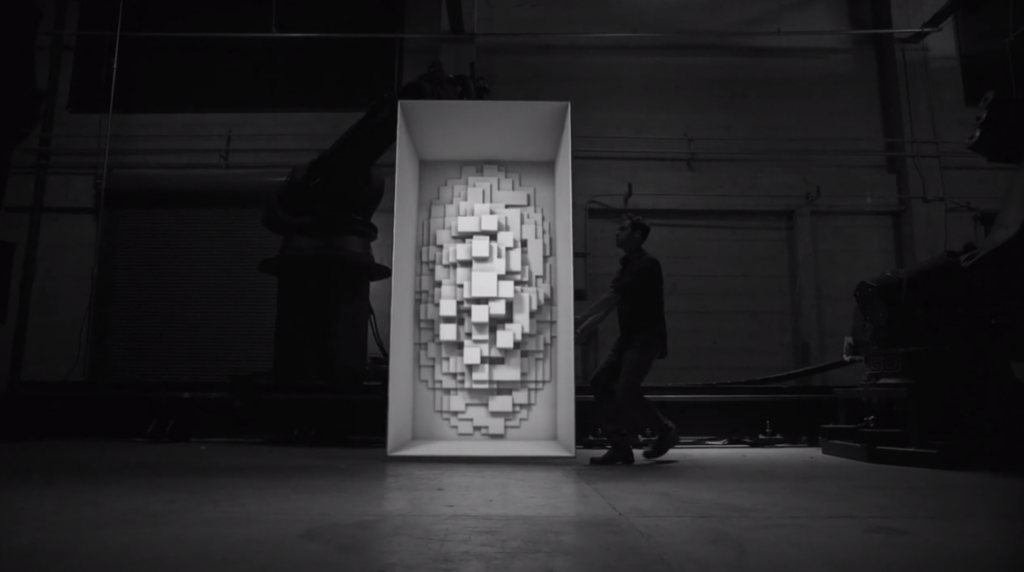 This example really showed me the capabilities of projection mapping, and how even a 2D object can be transformed into anything through a combination of software and hardware. Creating 3D graphics, that create depth on a 2D surface, is something that I found interesting and I am looking forward to exploring the use of this technique further. 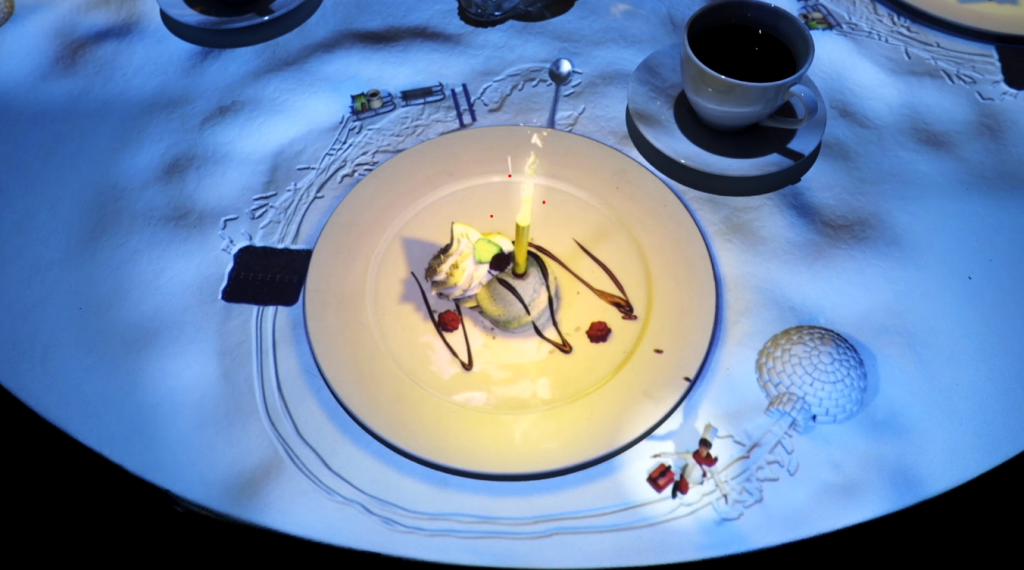 I really enjoyed this fun example of ‘Le Petit Chef’. What makes it so enjoyable is the simplicity of the story and the very clever implementation of projection mapping to create an experience. Unlike the previous video, Le Petit Chef implements real world objects, like the table, and plate, to act as a canvas, and further improves the illusion; so much that the spectators around the table begin interacting with the small chef, laughing at him, feeling happy for him when he lights the sparkler, and feeling sorry for him when the ice cracks. This immersive nature would be difficult to achieve on a flat screen and the implementation of mapping real-world surfaces adds to the illusion.

Upon initial download of MadMapper, the software itself was relatively straightforward to use after a brief class demonstration. The first couple of experiments just involved projecting shapes onto objects around the room, much like the example of Le Petit Chef. One experiment had the projection mapped to the door-release button, changing it from red to green. This could be implemented further, with sensors and cameras determining when the button is pressed, thus changing it’s colour. This approach left me wondering about the possibilities of projection mapping in open spaces, and how we could almost remove the need for decoration, or physical implementation of objects and use projection mapping instead. Raskar, R, et al. (1998) fanaticised this idea, suggesting that we could replace the ceiling lights with ‘computer controlled cameras and “smart” projectors’ that will be used to display high resolution images on surfaces around the office. Raskar spoke about how we could ‘designate every-day (potentially irregular) real surfaces in the office to be used as spatially immersive display surfaces’, much like Le Petit Chef has done with a restaurant table. His other suggestion, that this could also be used for tracking, interaction and augmented reality purposes, strongly links with our thoughts on the door-release button, allowing it to change colour when interacted with.

However, this was not possible to implement without researching further equipment and technologies, so we used other materials that were available to us. We assembled small cardboard boxes on top of each other, almost like how rectangles would be arranged in a game of Tetris. We mapped each box individually, and gave it a colour in the MadMapper software. We wanted to give the effect of a Tetris animation, where each set of colours would move down and stack from the bottom. We did this through the use of scenes in MadMapper, which almost act like keyframes, in which I am familiar with in other software like Adobe After Affects. I liked the short animated sequence, as it revealed the strengths of the software and projection techniques. Our simple Tetris example could be implemented into an immersive game, where the player would play a giant version of Tetris, with projection mapped blocks. Each block wouldn’t have to be a colour, it could be an image, animation or video, which could make for a better experience. This could be done with small individual computer screens, but the flexibility in which projection mapping provides makes it a superior alternative.