Spatial Montage or ‘split screen’ is a technique that has been used across films and TV for decades; from the simple dividing line in the middle of the screen to show two sides of a phone conversation, and the gutters used in comic books to separate scenes and actions, to modern uses of split screen with motion, animations and in some cases augmentation. The common occurrence of the phone conversation has been argued as a ‘standard convention’ of split screen, where ‘the depiction of the shared-but-separate telephonic space is one of three major technological influences that have motivated the exploration of cinematic split-screens’ (Hagener, cited in Bizzocchi, 2009). Hagener (2008) spoke about the concept of split screen, as it actually highlights the act of framing itself as it is the frame that ‘draws a distinction between inside and outside, between image and non-image’. He described this as ‘baring the device’ whereby a technique that is usually invisible, such as a frame in a film, is now made obvious. However, Hagener suggested that during the 1950s and 1960s, the dominant form of Holywood comedy was ‘sex comedy’, and this genre had a solution to this issue: phone conversations. He said it works perfectly as it ‘echo’s the basic properties of split screen’ – there are two places and two scenes, yet they are also connected; ‘the division of space refers to the physical space of the callers who are in distant locations, where the acoustic space is shared by both speakers’ (ibid). This very much depicts a real life phone conversation and therefore anything but the use of a split screen, especially when the conversation is so intimate much like a sex comedy, could feel wrong.

Eisenstein (1949) spoke about spatial montage, describing each shot in a montage as a ‘cell’, whereby ‘just as cells in their division form a phenomenon of another order, the organism or embryo, so, on the other side of the dialectical leap from the shot, there is montage’. He stated that montage represents a conflict or contradiction and ‘as the basis of every art is conflict […] it also must be considered from the viewpoint of conflict’. Spilt screen depicts conflict. He went further, stating the conventions, or ‘ cinemagraphic conflicts’, which could be used to create montage:

We can see Eisenteins’s conflict in a phone conversation in films such as ‘Pillow Talk’, where two characters are a distance from each other, much like Eisenteins’s conflict of a dimension and depth. Hagener spoke about the effect of a split screen in Pillow Talk, as it provides the audience with a couple in a ‘shared (virtual) space before they actually share a (physical) space’. It foreshadows what is about to become of the couple and could be seen as a form of dramatic irony, where the audience are more aware spatially and conscious about what is about to happen. We see them together in a scene before they even fully fall in love and can tell how much they work together. Whereas, the narrative has to ‘work through the intricate plot movements in order to get rid of such an unclassical device as split screen’. In the final part of the film, there is no split screen to be seen, just a couple together in a physical space. 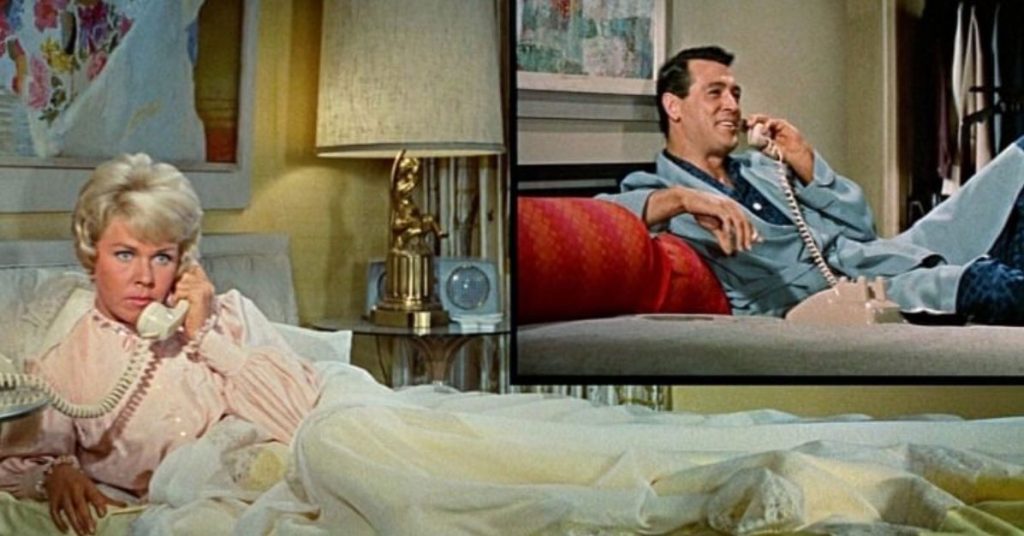 The recent example of Nike’s ‘You Can’t Stop Us’ campaign is a simple yet well thought out example of split screen. This example of a video does in fact follow Eisenstein’s statement of conflict. It was used as a campaign to show the importance of sport and how it will make a strong return after the pandemic, and the split in the middle of the screen acts as a pragmatic divide of race, class, gender, sport, sex; all subjects that ‘conflict’ each other in regards to being opposites on a spectrum, but then the line is always crossed, representing people coming together because of sport.  The techniques used are simple, with no motion and just two frames placed side by side, yet the action is perfectly synced and aligned between both sides of the divide. This was done by searching through over 4000 pieces of archive footage, which where than matched, and presumingly cropped and repositioned to align both sides of the composition together perfectly.

One of the challenges that this creates (assuming some footage was cropped to make it align perfectly) is the amount of quality available to work with. The actual video on YouTube is at 1920 x 1080 resolution, so if some of the footage was filmed in 4k, this would have been a straight forward process. However, I can only assume a lot of this would’ve been regular HD footage, as many of it would be archive material from TV. Therefore, this may have had limitations when editing, and additional work may have been done to maintain the quality. This is why this piece of work in particular is very interesting, as it maintains a good narrative flow without compromising on quality.

We created a very quick example of a split screen video. This could perhaps loop in the form of a GIF, or could be used in a bigger sequence in something like a SciFi film where characters are teleported to different locations, with each location on a different side of the screen. One issue quickly discovered was the fact that the lines in the background of the video aren’t parallel. This wouldn’t be an issue if the two frames had an entirely different background, but as they are visually similar they should be a reflation of each other. This is where filming in a higher resolution than HD would prove helpful, as we could reposition the images without losing any quality. However, we decided to crop in and adjust the frames anyway, as the loss of quality wasn’t that noticeable, leaving the result below.

If I were to create something like this again and decide to follow the generic split screen, where the frame is made up of two halves, I would carefully consider the use of setting. Much like Pillow Talk’s use of the split screen to replicate the physical distance, I would carefully consider the settings in which I place the objects or characters to reflect this, and create a ‘conflict’. This also highlights the importance of colour and lighting – do they contrast to create a strong contrast, or do they match to reflect harmony despite being at a distance? Both depend on what narrative is being conveyed. I would also like to consider the use of sound design more when working with split screen in the future. Despite having a visual montage, the lack of sound design can lose the impact of the technique. I would need to consider which frame the sound is coming from, if any at all, and would the sound reflect the conflict that is being created visually, or juxtapose it. Finally, I would really like to explore more methods of spatial montage, as opposed to the conventional split screen, such as placing frames within frames and explore frames within augmented spaces.

Hagener, M., 2008. THE AESTHETICS OF DISPLAYS: HOW THE SPLIT SCREEN REMEDIATES OTHER MEDIA. [Online] Refractory: a Journal of Entertainment Media, Available at: <http://refractory.unimelb.edu.au/2008/12/24/the-aesthetics-of-displays-how-the-split-screen-remediates-other-media-%E2%80%93-malte-hagener/> [Accessed 23 November 2020].

Bizzocchi, J., 2009. He Fragmented Frame: The Poetics Of The Split-Screen. Simon Fraser University: School of Interactive Arts and Technology. Available at: <http://web.mit.edu/comm-forum/legacy/mit6/papers/Bizzocchi.pdf>